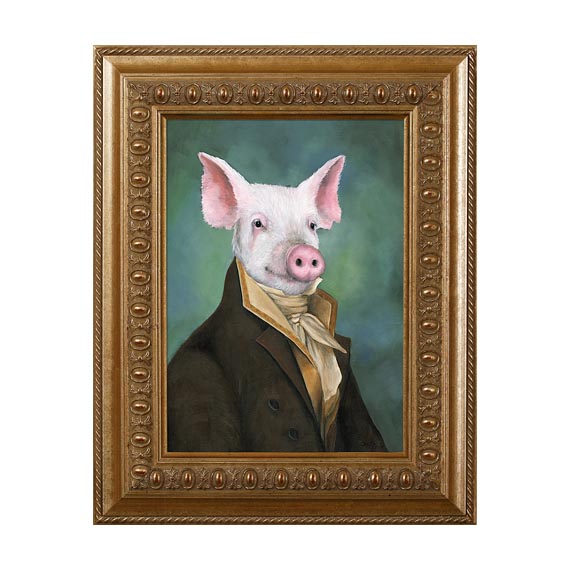 If you’re looking for gift ideas for pig lovers, these magnets are just the thing. Sometimes cute vintage pig art is the perfect purchase.

These are the most fun pig gifts to give pig lovers!

And a great little fridge portrait for your farmhouse-décor kitchen.

Mr. Pig wears the typical attire of an early American landowner. His little magnet portrait makes great farmhouse décor for the kitchen. Though I painted this portrait recently, it has the look of vintage pig art. He looks dignified, as well, much like an early American land owner would have; he’s dressed in that way. He and the Mrs. make a piggy power couple. Their purpose is to bring on the smiles and brighten your day.

Real life pigs are smart creatures. It’s one of their distinguishing features. Another notable characteristic is that they grow to be really big. If you’re a pig fan, you may enjoy the story of Esther the wonder pig. She was rescued by a couple who were told she was a micro pig that would grow to be a 70 pound adult. Six hundred pounds later, she changed the lives of that couple…. in a good way. She’s got a large following on facebook…. she and her best friend Cornelius (a turkey). They have quite a great life. And an extensive wardrobe, too.

If you’ve got a whole barnyard theme going, you’ll want to check out my goats, and Captain Rooster, too. You can create your own barnyard royalty gallery on your refrigerator.

My magnets are 3 inches by 4 inches, and made with 30 mil magnets, which are a bit stronger than your average fridge magnet. I make each and every magnet by hand! A cute little hand made item for well under $10 (and free shipping in the USA to boot) is a fantastic deal! They’re packaged nicely and great for gifting. I send the magnets out withing 24 hours, and they are shipped (with no tracking) via USPS. So you should get your magnet before you know it. 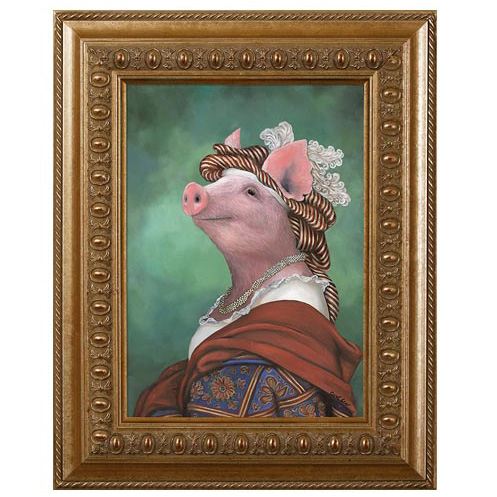 Mr. Piggy has a Missus who would just love to come and live with you too.

Find me here
Perfect! It arrived on time and was exactly as described.
Kristal H.Etsy Customer
Given as a gift, the person was thrilled with it. Shipped quickly. Will buy from this seller again.
Eva S.Etsy Customer
Absolutely beautiful! A big hit with my friend, thanks!
Owen B.Etsy Customer
Previous
Next

This is Bunsen Bean. He works here at the Old World Pet Portrait magnet department, and he makes sure every magnet order is properly packaged. He's looking forward to your order.