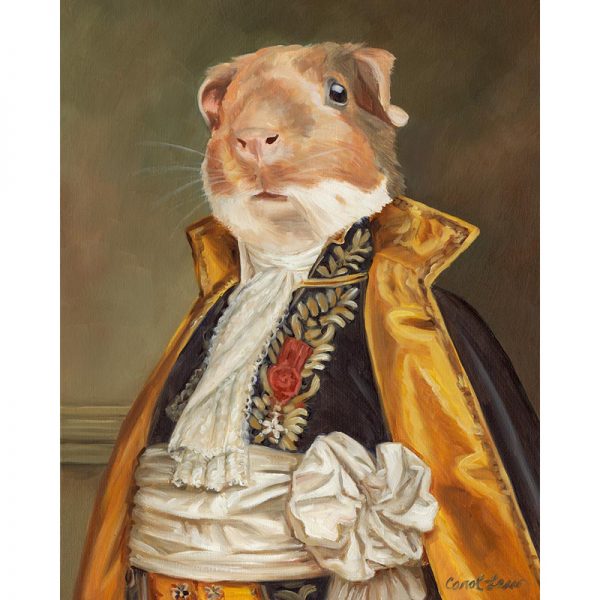 What’s the cutest guinea pig ever? A cute fat guinea pig with a gold lined cape and great big bow.

If you're looking for a Guinea pig novelty gift, Lincoln's portrait is a great choice

Lincoln, who is arguably the cutest guinea pig ever, wears his royal attire proudly. He is a Count, after all. With a great big bow and wide cumberbund at the waist, he’s boastfully showing off his perfect cute fat Guinea Pig’s figure. Put a lavish frame on the print and there won’t be any doubt that this is a favored kind of pet in your household.

Folks who are die-hard cat or dog fans may think Guinea pigs are a lesser choice as a pet. Guinea pig fans would disagree. Here are some of my favorite Guinea pig videos. If you’re not already enamored with them, maybe these will change your mind.

Two classic Christmas stories were recreated using Guinea pigs as the characters of the stories. The magical set of Guinea Pig Nutcracker is breathtaking. The actors are adorable. In the video The making of A Guinea Pig Christmas Carol, you can’t help but be impressed by the Guinea pigs’ outfits. The wardrobe department deserves an award.

Then there’s the Guinea pig art museum created by a bored school teacher who was quarantined in her home at the beginning of the pandemic. Impressive. Here, you’ll see the tremendous athletic abilities of Guinea pig in a short film called Guinea Pig Olympics. A family created a Guinea Pig action hero story. “To the Guineamobile!” So cute. And then there’s the sequel. So creative. An unusual use of leggos.

Here's info. about how the canvas prints and paper prints are made and sent.

If you're new to buying art, I can help you figure out what to buy and how to hang it.