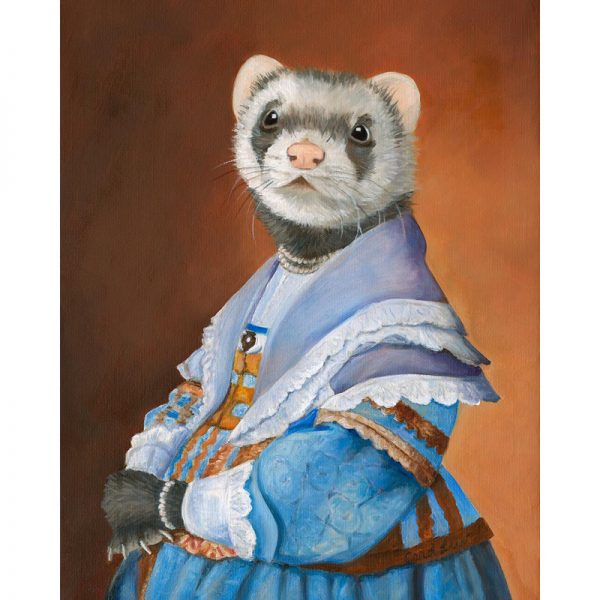 This is just the ferret art for you if you have a ferret. What fun to have ferret décor in the room where they live! The ferret print comes in lots of sizes

Perhaps this is a ferret print of your ferret's' great, great grandmother

This ferret artwork is pretty fun on its own. I may be biased on that though! But it’s even more fun if you weave a story around it, and here’s one for you.

In the kingdom of Mustela, there was a princess named Emanagilda. She was not only the most beautiful ferret of the land, but she was a warrior as well. The princess fought valiantly in the noteworthy battle of Humptulips, and that victory freed all of the ferrets of the land from slavery. Emanagilda is known in the history books for saying of her subjects “Let them eat grapes”. She was mistaken of course, as grapes are not good for ferrets, but she did not know that at the time. Her ladyship was forgiven for her inaccuracy. Queen Emanagilda had several sons, one of them who fathered the ferret who is our ferret’s great grandmother.

It’s all written in the great hall of records located in Mustela. We discovered a small bit of this history, but most of our information was uncovered by Louis Henry Gates in preparation for an episode of Finding Your Roots.

This ferret is  wearing the outfit of the famous portrait “Girl in a Blue Dress”, painted by Johannes Verspronck in the 1600s. Such a lovely blue, and this prim and proper girl looks sweet but with just a little mischievous glint in her eye. It’s the perfect gift for a ferret enthusiast. An overelaborate frame will really show this print off.

The ferret print shown here is 5×7″. It looks great in a small, but ornate, tabletop frame. We send all of our 5×7″ and 8×10″ prints right from here (larger prints and canvas prints are drop shipped). My assistant, Bunsen Bean, fancies himself a Santa elf. He is in charge of envelope-sealing.

Click here for information about how the prints are made and sent. If you could use a little help thinking about which prints are right for you, and how to hang your artwork, click here.