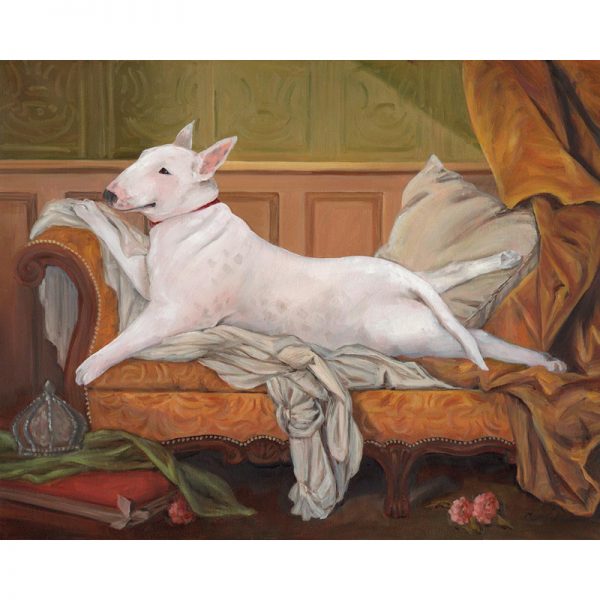 This cute English bull terrier brings old world charm to bull terrier wall art. And don’t they lounge like they are the subject of an odalisque, anyway?

The basis of the word Odalisque stems from the Turkish word Oda, which describes the servant a harem. The form of art became popular in Europe later on, and became more of a sexual look at the female form. Is the Odalisque a celebration beauty? Is it the objectification of women? There are many examples of odalisques, and lively discussions about the art form.

But here at the Old World Pet Portraits homestead, it’s simply seen as a lovely piece of art, and just right for a Bull Terrier that enjoys sprawling out on a couch.

I painted this pup in the fashion of “Reclining Girl”, an odalisque by François Boucher painted in 1751. He was known for painting voluptuous females, and people of the era thought that this, and other odalisques, crossed a pornographic line. Not so with the subject of our painting. In this day and age, we don’t give it another thought when we see a nude Bull Terrier.

My prints look best when they’re in wide, ornate frames. The more over-the-top the better. It’s like putting an explanation point on the ridiculousness of the portraits. You’re all in, like “yea, it’s a dog, what’s your point?” Once you get into that kind a discussion with someone, you can take it further. Apologize for being so testy, and explain that it’s because this is your dog’s ancestor, and you’re quite proud of the royal heritage of your dog. And this is what it means to be nuts about your pets. 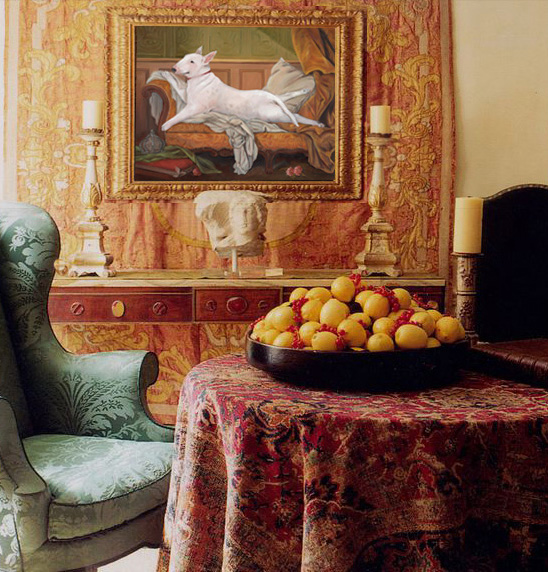 Love these old world pet portraits! Will be ordering more as gifts. I framed this for my sister as a Christmas gift. I know her and her husband will love it. Such a fun gift.
F. JacobsEtsy Customer

Here's info. about how the canvas and paper prints are made and how they're sent.

What kind of print should I order, and how would I hang it?