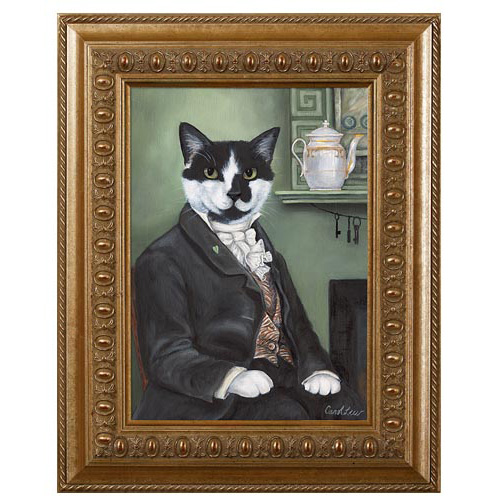 It's cat art. Black and white cat! This is a great gift to give to a feline worshiper

Your sophisiticated cat lover will appreciate this magnet

These 30 mil magnet is a nice hefty size for holding papers on your refrigerator. The 3″ x 4″ size is largish, too. All the better for viewing this classic piece of art (with a whimsical twist). I print the images on ultra premium glossy paper, mount it on the magnet, and trim the edges. That makes this a hand made gift for well under $10; what a find! They’re packaged nicely and just right for gifting. In most cases, I get orders out within 24 hours. I ship by way of USPS (no tracking). There are over a hundred magnets to choose from. Get a bunch and you’ll have great little gifts to give whenever you need one.

The story of Sir Simon of the Red Lion Inn 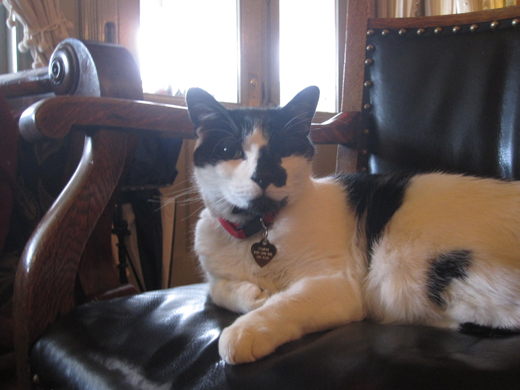 For a time, Simon was the only full-time resident of the Red Lion Inn in Stockbridge Massachusetts. Simon was adopted from a shelter where I volunteered, and before long, he made himself thoroughly at home at the Inn.

This regal feline took on the job of guest greeter, and often escort late night arrivals to their rooms. He spent most of his time in the lobby, where he let guests to pet him. He didn’t need the attention. He allowed it to be showered upon him, and it often was.

Simon enjoyed flower arranging as a hobby, much to the dismay of the Red Lion Inn florist. But for the most part, he was adored by the staff. So much so that once, he came close to winning the title of Employee of the Month, an honor bestowed by fellow employees’ votes.

The Inn owner commissioned this portrait of Simon, and it still hangs in the main lobby. The portrait is a stop on Inn tours, there the tour guides tell story and legend of Sir Simon. It’s a treasured item at the inn… not at all considered weird cat art!

After several years of retirement, Simon passed away. It was a life well lived, and a legend often told.

Love these. Perfect pick-me-up gifts for me and friends.

Laura M.Etsy Customer
Excellent. They are great! I want more.